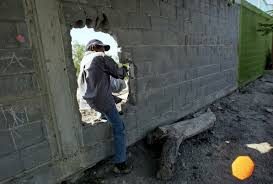 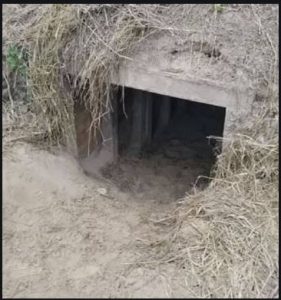 Smuggling gangs in Mexico are sawing through new sections of President Trump’s border wall by using commercially available power tools, making openings large enough for people and drug loads to pass through, according to U.S. agents and officials with knowledge of the damage.

The holes come about using a reciprocating saw you can pick up at hardware stores for about $200. Within a matter of minutes, these saws can slice through steel and concrete.  The blades for these saws cost from $10 to $15.  Once cut, smugglers push the steel out of the way, allowing adults to come through the gaps.

The funds for this wall have come from the defense l budget to the tune of ten billion dollars. For this, taxpayers will get a “holey wall.” Meanwhile, Trump declares in speeches the wall to be impenetrable. Future funding will from reductions in health care, reductions in the budgets of the Environmental Protection Agency, the departments of State, Transportation, Education, and Interior are expected to pay for the rest.

Smugglers are not limited to sawing holes. They make makeshift ladders to scale over the tops of the wall. Just as the rulers of the past erected gates and tombs to honor themselves, Trump has a wall that appears to be as useful as an inflatable dartboard, a submarine with screen doors or a pen with no ink.

It will be a cat and mouse game that will go on indefinitely – taxpayer dollars repairing the holes in the wall while drug smugglers figure out new ways to get through the wall.

The smugglers are good at adapting. As long as smugglers can make big money smuggling drugs, people, and illegal merchandise they find ways to cut the holes and make the cut portions appear to be in their original positions, disguising the openings so they will go unnoticed and can be used over again.

This is like crooks and scamsters and who continually figure out new ways to cheat people out of their money, like phone calls pretending to be about social security or from the government informing you there is a warrant out for your arrest, and gift card scams.

Is this wall a monument to ego or an exercise in futility or both?