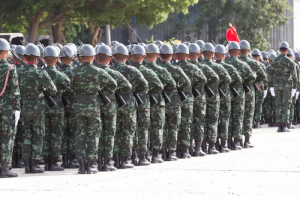 Trump’s pattern of behavior is exactly that of a fascist hoping to seize power and remake a nation. The troops in Portland were the first of many of these occupations.  He has a secret army carved out of the Homeland Security budget.

“President Trump declined to say whether he will accept the results of the November election, claiming without evidence that mail-in voting due to the coronavirus pandemic could “rig” the outcome.”

July 30 tweet: “With Universal Mail-In Voting (not Absentee Voting, which is good), 2020 will be the most INACCURATE & FRAUDULENT Election in history,” Trump tweeted. “It will be a great embarrassment to the USA. Delay the Election until people can properly, securely, and safely vote???”

September 13 rally: “The Democrats are trying to rig this election because that’s the only way they’re going to win,” he said.

September 23 Oval Office: “But in terms of time, we go to January 20th. But I think it’s better if you go before the election because I think this — this scam that the Democrats are pulling — it’s a scam — this scam will be before the United States Supreme Court. And I think having a 4-4 situation is not a good situation, if you get that,” he said.

August 20 rally: “So this is just a way they’re trying to steal the election, and everybody knows that. Because the only way they’re going to win is by a rigged election,” he said.

Trump floats remaining in office even after two terms

August 17 rally: “We are going to win four more years. And then after that, we’ll go for another four years because they spied on my campaign. We should get a redo of four years,” he said.