If there are further debates between Trump and Biden — they both have to agree to the rules, the best remedy for Trump’s unruly behavior might be to turn off his microphone when it is not his turn. Of course, Biden would need to allow this, too.  If my son were a first-grader and behaved like Trump, he would at least get a spanking or sent to the corner.

Most concerning was Trump’s endorsement of the far-right Proud Group. His “Stand Back and Stand By” will be quoted in infamy for decades or centuries.

The same day as the debate as Donald Trump, Jr. published an ad urging people to join the “Army for Trump’s Election Security Operation.”

Here is the wording of the ad

“The radical left are laying the groundwork to steal this election from my father, President Donald Trump. They are planting stories that President Trump will have a landslide lead on election night but will lose when they finish counting the mail-in ballots. Their plan is to add millions of fraudulent ballots that can cancel your vote and overturn the election. We cannot let that happen. ‘

“We need every able-bodied man and woman to join Trump’s election security operation at defendyourballot.com. We need you to help us watch them, not just on Election Day but also during early voting and counting boards. President Trump is going to win. Don’t let them steal it. Go to defendyourballot.com and enlist today.”

Our democracy is being challenged at its core. Everything I learned about the guiding principle of the United States embodied in the Declaration of Independence ”  All men are created equal, that they are endowed by their Creator with certain unalienable Rights, that among these are Life, Liberty,  and the pursuit of Happiness” is in peril.

Now Trump has backtracked, saying a day after saying he didn’t know about the far-right group and changed his message to say the group should “stand down.”  Do you think this group is going to drop the “Stand Back and Stand By” endorsement they got? 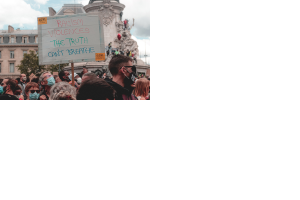 If Trump suffers losses members of fringe groups like Proud Boys and Boogaloo may riot with widespread looting, especially if Trump expresses support or encouragement for it. Protests against election results could get violent with loss of life.