They’re Killing Us Off is what I named this site. In the months since then, it has become clear, Trump is pursuing an agenda that will wipe out hundreds of thousands, if not millions of Americans. What the pandemic doesn’t kill off, violence can do the rest. This is premised on how COVID-D has been handled, Trump’s affection for a genetic explanation of differences, and condoning violence from the right.

As the White House has embraced a herd immunity strategy to dealing with the pandemic, a picture is forming of an administration at odds with the well-being of the American people.

Anthony Fauci, the head of the National Institute of Allergy and Infectious Diseases, has decried the White House’s embrace of a herd immunity strategy. He said because of a “general anti-science, anti-authority, anti-vaccine feeling,” the U.S. is “unlikely” to achieve herd immunity even after a vaccine is available. Trump has fed this negativity.

The Director-General Tedros Adhanom Ghebreyesus of the World Health Organization said herd immunity is obtained through vaccinating the public, such as with measles. “Herd immunity is achieved by protecting people from a virus, not by exposing them to it.” 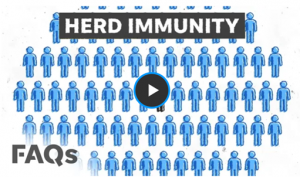 The United Kingdom and Sweden pursued such a strategy early on with Covid-D, but abandoned it when officials saw it would not work. To get herd immunity with measles, another especially contagious disease, only slows down after about 95 percent of people become immune.

Trump has talked about his belief in the superiority of his genes, dating back to his days as a Manhattan developer. Trump told Larry King on CNN in 2007, “You know, the racehorse theory, there is something to the genes,” “And I mean, when I say something, I mean a lot.”

Three years later, he told CNN that his father was successful and it naturally followed that he would be too: “I have a certain gene. I’m a gene believer. Hey, when you connect two racehorses, you usually end up with a fast horse. And I really was — you know, I had a — a good gene pool from the standpoint of that.”

Racehorse theory is a forerunner to eugenics theory, which led to the Nazis’ ‘final solution.’  Pronouncements like this signal to people who harbor racist or anti-Semitic views that he shares their outlook.

In the first Presidential debate this year, he alluded to his theory of gene superiority. “You could never have done the job we did,” Trump said to former Vice President Joe Biden. “You don’t have it in your blood.”

On August 15, 2017  in a press conference, Trump said of the violence in Charlottesville in which a woman died at a white nationalist rally in the city. A car ran into counter protesters “You also had people that were very fine people, on both sides.”

On October 15, on NBC TV, Trump refused to disavow QAnon. “I know nothing about QAnon. I know very little,” Trump told Savannah Guthrie. “You told me but what you tell me doesn’t necessarily make it fact. I hate to say that. But I know nothing about it.

That same day in Greenville, North Carolina, speaking at a campaign rally, Trump bragged about the extrajudicial killing of Michael Reinoehl, an American citizen in Portland, Oregon.

Trump has praised the candidacy of Marjorie Taylor Greene, the 43-year-old Qanon figure from a wealthy Atlanta suburb as a rising Republican star.   “I, like many Americans, am disgusted with the Deep State who have launched an effort to get rid of President Trump.”

QAnon is a far-right conspiracy theory whose followers believe that an underground cabal of satanic worshipers run child sex trafficking rings and are in control of the so-called deep state government and that Trump is working to expose them.

During the first debate with Vice-President Biden, when asked to condemn “white supremacists and militia group, the memorable part of his non-answer was clear. “Proud Boys, stand back, and stand by.”

The White House blocked an effort by the U.S. Centers for Disease Control to require the use of face masks on public and commercial transportation and initiated, against the wishes of CDC scientists, causing an unknown number of people to be exposed to Covid-D, going back and forth to work.

What the pandemic doesn’t kill off, violence can do the rest.