During his time in office, Trump has undone or weakened up to 70 rules and regulations aimed at protecting the environment, while another 30 policy changes are still underway.

Meanwhile, fires are burning at destroying forests and property at record levels, and weather patterns are aggravating our troubled economy. Six of the 7 largest wildfires in California history have all burned in 2020, and the largest, the August Complex fire, became the state’s first-ever gigafire — meaning it burned over 1 million acres, scorching more acreage than the state of Rhode Island. 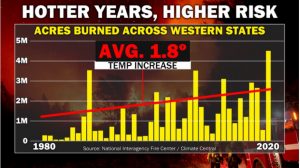 Ice in Arctic Sea Ice is not freezing in October for the first time on record, another strong warning of climate change. Paradoxically, this summer there were wildfires across the Siberian Arctic. These are called “Zombie fires” which smolder under the northern snow. They are also known as “hold-over fires“.

Trump says the answer to preventing forest fires is forest management. Yet more than 250,000 acres’ worth of unfinished projects aimed at preventing catastrophic wildfires are suspended because the U.S. Forest Service doesn’t have enough funding to complete them because of Trump underfunding forest management.

Trump, a longtime denier of the climate crisis, continually  rants about AOC and calls the Green New Deal “the craziest plan that anybody has ever seen.” Meanwhile, a New York Times analysis, based on research from the law schools like Harvard and Columbia, more than 70 environmental rules and regulations officially reversed, revoked, or otherwise rolled back by Mr. Trump. Another 26 rollbacks are still in progress.

One thought on “Destroying the Environment”