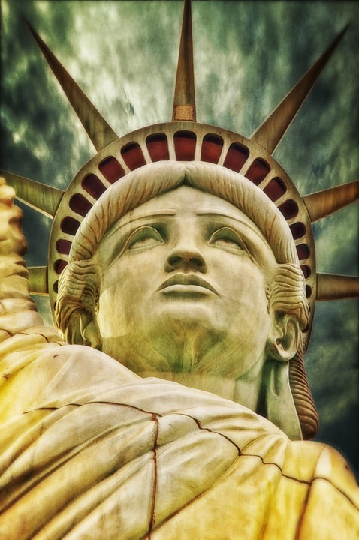 When my mother was extremely upset about something, she would say she felt “heartsick.” That describes my feelings about the white supremacy, misogyny, xenophobia, and bigotry that Donald Trump has escalated in this nation.

My wife and I just watched the series, “The Plot Against America” which postulates Charles Lindberg being elected President, defeating Franklin Delano Roosevelt. Lindberg’s battle cry was “Lindberg or war!” Following Lindy’s election were killings and burning of Jews and African Americans. Lindberg had let loose a vein of hatred that runs deep among some in this country. Of course, this was fiction.

But Trump’s election brought out these cracks, flaws, and endemic problems in our country’s values and systems that were evident in the 2016 election results.

Every vote for Trump in 2020 was someone expressing anger and rage. Fed by false versions of the news on “One America News” “Newsmax, and Fox. feed, they believed the lies and distortions Trump spewed.

In the wake of Trump’s rhetoric, our cities have been torn by mob violence, mostly done by Trump supporters, and we’re witnessing the effort by Trump to get the election results in battleground states overturned and effect a coup.  America is hemorrhaging as a society along lines of race, education, and geography A sizable number of Americans don’t want to live in a democracy. Corey Lewandowski (Trump’s campaign manager and senior advisor) repeated the slogan from German concentration camps during World War II: “Work sets you free.” (“Arbeit Macht frei”)

Texas Congressman Louie Gohmert claimed to a “Million MAGA March” audience near the White House that “this was a cheated election and we can’t let it stand.” He spoke of the American Revolution and the Egyptian uprising: “They rose up all over Egypt, and as a result of the people rising up in the greatest numbers in history,” he said, and “if they can do that there, think of what we can do here.” Gohmert was quick to point out that “only about 30%” of American colonists supported that previous revolution. You don’t need a majority in these matters, after all. You just need enough ammunition.”

Other extremists go even farther into la-la land calling themselves. A group called Three Percenters is based upon a myth that only three percent of the residents of the Thirteen Colonies took up arms against the British in the Revolution.

Some explain this disconnect with reality as disintermediation that has eroded respect, and trust of traditional authorities in all fields from science to academia, journalism, and experts of all kinds as to what is real – our sense of shared culture, understanding of reality, and our democracy. Conspiracy theories resonate with some of our brain’s built-in biases and shortcuts, and tap into some of our deepest desires, fears, and assumptions about the world and the people in it,” as Brotherton writes, “We are all natural-born conspiracy theorists.”

Historically in the US, the witches of Salem supposedly conspired with the devil. Queen Elizabeth I, who reigned from 1558 to 1603, was thought by some to be a man. The Illuminati, a real society of intellectual thinkers that came and went more than two centuries ago in Germany, allegedly orchestrated the French Revolution in 1789, is responsible for the eye in the pyramid on the U.S. $1 bill.

Possibly a more grounded explanation is that wages have stagnated or declined for many people, resulting in a  growing gap between rich and poor, overproduction of young graduates with advanced degrees, and exploding public debt. Increasingly, militias who operate as the violent arm of a political movement engage in lucrative, criminal activity to supplement their incomes and ‘use their skills. Historically, such developments have served as indicators of looming political instability. The Boogaloo Bois are the adherents to armed aesthetics and modalities aimed at setting off or preparing for the second American Civil War. The group concentrates on recruiting active and retired officers from both the police forces and the armed forces of the United States

This is the rationale of the Republican’s suit to overturn the 2020 election, which the Supreme Court has declined to hear.

America has three cleavages: race, education, and geography. One in 10 Americans identifies with a conspiracy that the FBI has identified as a “domestic terrorist” threat.  Just beneath the veneer of legality are white supremacist groups that have carried out a majority of “terrorist plots and attacks” in 2020, according to the Center for Strategic and International Studies.

Rural whites with less education supported Trump by large margins — despite the horrors of the last four years. That “despite” is key — because this was not a normal election, after a normal Presidency.

Although many US militias can be described as ‘latent’ in that they threaten more violence than they commit, several recently organized militias are associated with a right-wing ideology of extreme violence towards communities opposed to their rhetoric and demands for dominance and control. At least one Trumpkin pastor has called for Democrats and journalists to be executed.

The open endorsement by public figures such as Corey Lewandowski (Trump’s campaign manager and senior advisor) repeating the slogan from German concentration camps during World War II: “Work sets you free.” (“Arbeit macht frei”) of these groups from public figures and select local law enforcement has given them space to operate, while concurrently allowing political figures to claim little direct responsibility for violent actions from which they hope to benefit.

Donald Trump has been courting these extremists since at least 2016. Three of his most controversial pardons are related to this movement. In August 2017, Trump pardoned former Sheriff Joe Arpaio, also a member of the CSPOA. In July 2018, Trump pardoned Dwight and Steven Hammond. Make no mistake about it, these pardons were to shore up support from the most far-right law enforcement and militia types in the country. There can be no doubt Trumpeteers are developing a playbook straight from Nazi Germany’s sordid past.

For years, ties have been forming between white nationalist groups in the US and Russia, experts say. US extremists have long seen Russia’s President Vladimir Putin as a bulwark against what they regard as the forces of decadent liberalism. Neo-Nazi Matthew Heimbach, one of the organizers of the 2017 Charlottesville white nationalist rally, 2017 described Putin as “the leader of the free world.”

The relationship between Putin’s Russia and America’s resurgent white nationalists goes further than expressions of admiration or ideological affinity. Experts say that groups have for years been building alliances in an effort to form an international white nationalist movement.

One is the Russian Imperial Movement (RIM), which in April became the first white nationalist organization to be designated a terrorist group by the US State Department.

Heimbach, the Charlottesville organizer, met with RIM leaders in the wake of the rally. They had traveled to the US to broker alliances with white nationalist extremists. Heimbach at the time told Think Progress that the movements shared a commitment to “conservative reactionary politics, spiritual revival, and nationalist principles. Blazakis, the academic, said: “RIM has worked hand-and-glove with US-based white supremacists.

Now the truth is out. On December 17. Chris Hayes revealed on his show: “Donald Trump and our government under his leadership explicitly pursued a strategy to spread the virus, to get more people sick. They took the side of Covid. They had the same aims as the virus. They were—as I said before—objectively pro-Covid.” This clearly lays out  They Were Trying to Kill Us Off, what I named this website over a year ago. 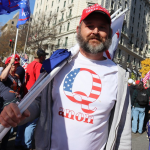 Like the Nazi proclaimed all ills were caused by a hidden global elite of monsters/vampires/demons — that is, the Jews, so QAnon declares all problems are caused by a hidden Satanic elite —  a secret cabal made up of demonic liberals from Hollywood, the Democratic Party, and the deep state, performing monstrous blood rituals on children.

Chad Wolf, the acting secretary of homeland security, wrote in his department’s annual assessment that he was “particularly concerned about white supremacist violent extremists who have been exceptionally lethal in their abhorrent, targeted attacks in recent years. [They] seek to force ideological change in the United States through violence, death, and destruction. The primary “terrorist threat” facing the United States are lone offenders and small domestic extremist cells who may act out grievances.

Some Americans are purchasing guns, according to two dozen voters, online groups, and data surveyed by Reuters. Firearm sales hit a monthly record of 3.9 million in June, according to FBI data. Ammunition for AR-15-style rifles is on backorder in states like Washington and Colorado. 13 people were arrested in alleged plots to kidnap the state’s governor and attack the state capitol building.

Our lives begin to end the day we become silent about things that matter, said- Martin Luther King Jr.

2 thoughts on “America the Beautiful – What Is Happening?”