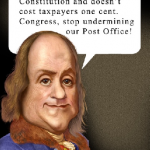 The post office cut back its service with the rationale this is what it needs to do to survive. At the same time, postage has risen 7.2 percent in the past 12 months, thanks in part to a three-cent increase in first-class stamps in August 2021. The U.S. Postal Service also raised the price of packages delivered by priority mail, priority mail express, and first class by between 25 cents and $5 per package, depending on weight and where the packages are going,

The U.S. postal system precedes the creation of the country by one year. It was created in 1775 and Benjamin Franklin was appointed the first Postmaster General by the Continental Congress. Then the Constitution provided in Article 1, “Congress shall have the power to establish Post Offices and Post Roads.”

The implementing legislation is codified in Title 39 of the U.S. Code. It states:

“The United States Postal Service shall be operated as a basic and fundamental service provided to the people by the Government of the United States, authorized by the Constitution, created by Act of Congress, and supported by the people.”

It’s no secret that the Postal Service, as much of the infrastructure in this country, has been under assault by those who are ideologically predisposed to dismiss the necessity of a functioning, well-managed government.  They would like to privatize the postal system, the national parks, the schools, the railroad, even roads, and bridges. For them, these public infrastructures are merely targets of opportunity, another way for the few to profit at the expense of the many.  By disregarding and undermining the value of public infrastructure at the expense of domestic tranquility and the promotion of the general welfare, they do a great disservice to the country. The postal system has been a target for generations.

The process of reducing the post office began in the summer of 2020 when officials told union officials that management was getting rid of 671 sorting machines, about 10% of the machines in the country. The sorters were the kind that handled letters and postcards,  and large envelopes. Mailboxes have been removed, overtime pay cut, and experienced managers were removed or reassigned.

American soldiers around the world depend upon mail from home; seniors and veterans get medicine by mail; unemployment checks go out by mail. The post office remains part of the structural backbone of the nation.

Our need for a post system evolves. Senator Kirsten Gillibrand, D-N.Y has proposed the Postal Banking Act, which would make retail banking services available at all U.S. Postal Service locations and other services including small dollar checking and savings accounts; transactional services including debit cards, cash machines, bill payments and online services. People with low incomes who otherwise do not have a bank would benefit. 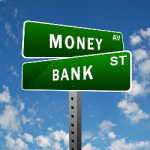 Postal banking previously existed in the U.S.  Known as “poor man’s banks,” post offices offered a number of financial services between 1911 and 1966, including savings accounts with modest interest rates. Postal banking was particularly needed during the Great Depression when many commercial banks failed.

Yes, the existing network of some 31,000 post offices in metro neighborhoods and small towns across America are perfectly situated and able to provide basic banking services to the one-out-of-four of us who don’t have or can’t afford bank accounts. The giant banking chains ignore these millions, leaving them at the mercy of check-cashing exploiters and payday loan sharks.

The goal of postal banking is not to maximize corporate profits, but public service. Moreover, there’s nothing new about this. Our post offices served as banks for millions of us until 1967, when Wall Street profiteers got their enablers in Congress to kill the competition.

Many nations offer postal banking. In Spain Slovenia, and the Czech Republic, post offices act as agents for banks.  In the United Kingdom, the post office has an exclusive partnership with the Bank of Ireland to offer bank accounts to customers. Germany’s postal bank is more than a century old, but over the last 25 years it has been largely privatized and Postbank offers financial services at more than 4,500 post office branches. as well as 1,100 branches of Duetsch Bank. In Italy, the post office has offered savings accounts for nearly 140 years. A subsidiary of Morocco’s post office offers limited banking license to serve lower-income consumers. The post offices in China France and Japan all hold universal banking licenses, and they all compete against private-sector lenders in a wide range of product categories.

Postal banking will in time increase revenue for the post office.  Small-dollar loans for consumers that offer low fees and low-interest rates can replace payday loans which are extraordinarily expensive with annual percentage rates near 400 percent and help keep the poor “poor.”

Mehrsa Baradaran, author of “How the Other Half Banks” and “The Color of Money: Black Banks and the Racial Wealth Gap” recently authored a report stating three key improvements to our current banking system that postal banking could accomplish:

Serving Americans in new and needed ways is a win-win for people and the post office. The big banks will continue to do well and only those who bleed the poor will be left out.

According to documents obtained by the Citizens for Responsibility and Ethics in Washington (CREW) via a Freedom of Information Act, Dejoy reportedly recused himself from agency decisions that might have affected the performance of his former freight transportation company XPO Logistics. However, the Postmaster General opted out of divesting from the firm altogether, opening him up to a blatant conflict of interest.

Last year DeJoy announced that he would formally divest from XPO in order to preclude any conflicts of interest from arising. At the time, CREW suggested that the nature of the divestment might be a “sham,” largely because DeJoy transferred his assets to his adult children, who could then return those assets to their father after he leaves government.

Also under scrutiny are a series of trades made by DeJoy last June, just a month after he joined the administration. The postmaster general specifically bought $50,000 and $100,000 in stock options for Amazon.

In October, DeJoy again announced a set of policies that would “result in serious delays and the degradation of service for millions,” said House Speaker Nancy Pelosi, D-Calif. The agency is expected to apply steep price hikes on commercial and domestic retail packages, as well as slow first-class mail transit by 30%.

The post office’s problems are worsened by the announcement that the  USPS filed with the Postal Rate Commission a very large postage rate increase.

However, the Postal Service Reform Act (H.R. 3076) now before Congress
will help stabilize USPS in two ways, by:

The Postal Service Reform Act passed in the Senate 79 to 19.