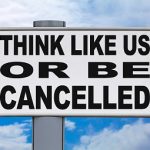 “Cancel culture” removes celebrity status or esteem from a person. It is an umbrella term under which people can be silenced who do not believe as most people do. “Political correctness” was an earlier version of this concept. While these terms are hazy and imprecise, the result of being “canceled” is exile from prominence owing to views or behavior.

Consider some of the people who have been tossed from celebrity status to being outcasts or pariahs. 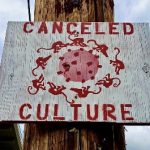 Often corporations, wary of consumer boycotts and unwanted damage to their brand names have reacted defensively, ending contracts, and terminating people. Censorship by its nature restricts free speech.  Mistakes happen when it is easy to cancel offenders and some people are being shamed undeservedly.

President Donald J. Trump defamed the FDA and Big Pharma, calling it a “ridiculous system that has been broken for decades.” His remarks shocked the current health community; these kinds of lies endanger the health of every American by delegitimizing the institutions we need.

An arbitrator has ordered Kevin Spacey and his companies to pay nearly $31 million to MRC, the production company behind “House of Cards,” after finding that Spacey breached his contract by violating the company’s sexual harassment policy.

MRC severed its relationship with Spacey and scrapped a season of the show in 2017, after multiple people came forward to allege a pattern of sexually predatory conduct.

MRC filed a petition on Monday in Los Angeles Superior Court to confirm the arbitration award, after the award was upheld in a confidential appeal.

Spacey and his companies, M. Profitt Productions and Trigger Street Productions, were ordered to pay $29.5 million in damages plus $1.2 million in attorneys’ fees and $235,000 in costs.

Conservative Republicans are more likely than other partisan and ideological groups to see cancel culture as a form of censorship and are more apt to see it as a way for people to cancel anyone they disagree with (15% say this) or as an attack on traditional American society (13% say this).

Pew Research has polled people about their feelings about cancel culture.

Here’s are two charts showing  some of their findings: 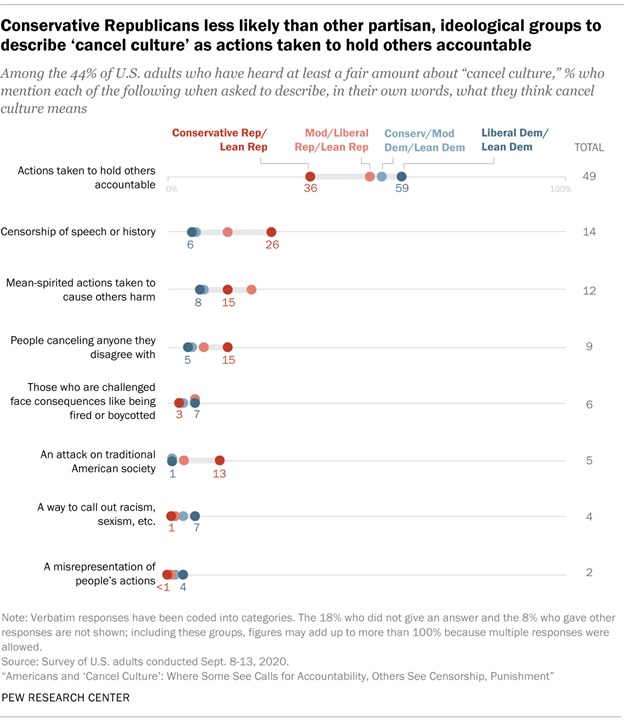 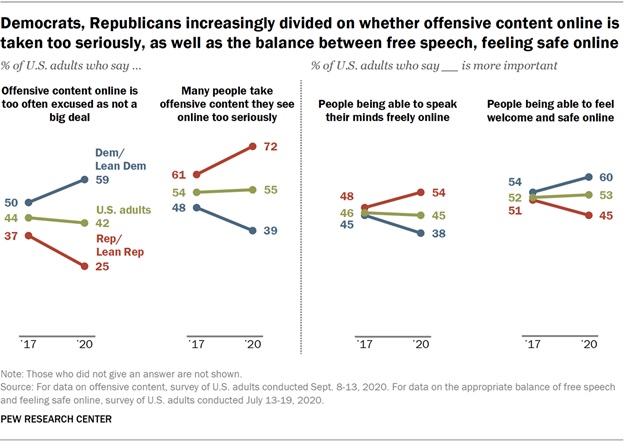 Diversity, sensitivity training, and body cameras may serve a positive social purpose.  But they have allowed for injustices to happen like forcing Al Franken to resign from the Senate.

Fox News ended  2021 as the most-watched and influential cable news network in the country. Trump soured on Fox’s news division toward the end of the 2020 election cycle, alternative right-wing outlets One America News and Newsmax briefly emerged as a home for Trump’s most loyal supporters.

Yet by the end of the year, little hand changed. Fox celebrated an industry best 1.3 million people in total day viewers in 2021, leading all of cable news for a sixth consecutive year.