Global warming is existential for us as a species at least at the current state of our industrialization. As long our homes are not in danger of wildfires, flooding, our drinking water plentiful and clean, people can ignore or be apathetic about the warnings about global warming.  A student who does not care one way or the other if he passes a class is an example of a student who has apathy towards the class.

Apathy is a lack of emotion or interest largely and a defense mechanism against underlying anxieties and a sense of powerlessness against the inevitable. When faced with environmental catastrophes, whether local or global, people tend to cope with their anxieties by pretending not to care.

The phrase “public apathy” was coined in the 1940s. If the public is disinterested in politics or then they are “apathetic.”  Apathetic is applied to people who are experiencing complex and wide-ranging emotions about what is happening to them, the outcome of which is inaction.

In addition to our own personal and family stuff, people are dealing with pandemics, educational issues, crime, political controversies, among other things.

If apathy and denial are symptoms of deeper unconscious processes, then public awareness campaigns no longer work, especially in Western democracies where decisions made from the top-down often backfire with political polarization.

Anxiety, mourning, loss, grief, and despair can all lead to not only apathy but active denial. Those people who you think are just ignorant or greedy and act it on the surface may not be. They might just feel hopeless or disconnected. This doesn’t only happen with ecological disasters. It can happen with local recessions such as the losses that turned much of the rust-belt (cities in states like Michigan, Ohio, Wisconsin, etc.) into an economically depressed and abandoned region. Think of the Flint water crisis.  Workers are replaced by robots or their jobs shipped overseas. Faced with uncaring leadership and monied residents decamping for sunnier and wealthier states, this hopelessness led to the election of Donald Trump in 2016, a populist who offered false hope and did nothing to slow or stop the decline.

Public campaigns intended to ignite widespread change frequently fail because they do not address the psychological “barriers to action”. In other words, if you want people to change their behavior to become more environmentally friendly or push for political change to that effect, you must understand why they don’t respond as you would like. While we can talk about why people don’t act as they should, those reasons often obscure the real barriers which can be far more complex than the surface reasons.

We embrace things that make our lives easier or more comfortable than are made to feel guilty about it.

Psychology has found that when threatened people often respond irrationally, especially when those threatening situations are modern. We simply didn’t evolve to manage long-term, regional or global problems. People are fully capable of worrying about the climate and outwardly denying or saying that there is nothing they can do about it even when both of those are false.

It is no accident that George Orwell’s 1984 (written in 1948) and the concept “doublethink” were published at the same time that Sigmund Freud was publishing on ego-splitting. Despite falling out of favor in many arenas, Freud’s ideas are relevant to understanding the psychological impact of global warming and climate change. The sense of impending doom or, in the aftermath, the trauma of lived environmental catastrophe creates a need to process it all while still functioning in a society that continues to contribute to that catastrophe. 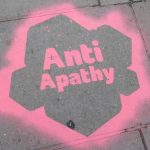 While some of us are online expressing our fears and anxieties about a world in peril, a great number of others cannot process the loss — loss of weather or climate of the past, clean air, and plentiful, clean water, and of pristine forests, rivers, and lakes. These create psychological defense mechanisms that any successful public campaign needs to diffuse. Shaming campaigns are hardly effective.

We have seen the standard of living rise through the industrial age. Knowing that the fruits and comforts of this age come at such a terrible cost can lead to intense psychic conflict. Unnamable terror becomes unthinkable, and feelings become fractured. People cope by denial or projecting onto others. We say it’s not happening or it’s somebody else’s fault. Shifting agency from ourselves to others (politicians, billionaires, executives, and other nations) makes us feel better in the short term but only makes us sink deeper into our sense of helplessness and apathy.

The way out is to radically rethink our approach to public awareness. First, we must recognize the internal psychic conflict people are experiencing. Loss, mourning, grief, and anxiety all play a role in dealing with both what once was (say a pristine and flourishing environment containing ecological abundance), the desire for it to be that way again (often with a denial that anything going on is out of the ordinary), and the fear that there is nothing that can be done (and therefore nothing need to be done).

We need to rethink apathy. We don’t need to get people to care more. We don’t even need to inform them more. They already care. They already know a lot about what’s going on, and more information can just drive the psychic conflict deeper. That’s how you get conspiracy theories and organized denial campaigns. That is public awareness doing more harm than good.

Moralizing climate change and shaming people for not acting better because they are “apathetic” does not necessarily lead to positive action. Rather it can strengthen defenses and have exactly the opposite effect.

Lertzmann suggests that people need to find a “home” for their concerns and desire to help. Public awareness campaigns often seek to instruct people as to what they ought and ought not to be doing but don’t really “think outside the box” in terms of finding that home. Environmental protection isn’t a black and white activity with a list of things that help and a list of things that don’t.

People who do engage in this black and white thinking often feed their own apathy. They assume that if they aren’t or don’t feel they can be doing certain specific things that the “experts” want them to do then they should do nothing. They project onto experts their own feeling of helplessness and defend against it.

People have a psychological need to explain why they aren’t doing more in order to offset their feelings. People are full of excuses. They say all recycling just ends up in the trash, so don’t recycle. Renewable power is an eyesore or impractical, so use fossil fuel. Electric cars take too long to charge (depends on the battery and charging station) or just use fossil fuels from powerplants (not if those powerplants use renewables) or don’t last (neither do ordinary cars) or only the rich can afford them (not if manufacturers get on board), so buy gas ones. Environmental organizations are only interested in money or full of “tree huggers”, so don’t support them. All of these reasons are defenses coming from a much deeper awareness of the problem than a truly apathetic person would have.

People enjoy sharing stories like the one you are reading on social media. It feels like doing something. And you know what? It is. And more importantly, it is finding a home for that concern so it doesn’t slide down into projection and defense mechanisms. But those of us who are creating these public campaigns have to be careful about what we share.

Lertzmann argues that the central feature of engaging people with the environment such as climate change is creativity. That is, if people can participate creatively, they can avoid their psychological barriers because they are no longer subject to the guilt and conflict of not being able to do the “right things” that they believe is expected of them. When people do find ways to contribute and feel that they are contributing (have agency), their sense of loss and anxiety melts into pride and joy.

Look for example at the proposal for a water pipeline from the rain-drenched gulf coast to the drought-stricken American West. Perhaps if they can do it for oil, they can do it for water. That requires money, government support, and time.

Outreach that simply focuses on consumer compliance —“ Do this”, “Buy that”, “Don’t Buy This” — will almost certainly fail. That said a little guilt can be good. It can help people do the right thing. A lot of guilt will lead to withdrawal and denial.

Outreach that is sensitive to the overwhelming problems we face and focuses on having good ideas and making contributions rather than compliance will have a much better chance of succeeding.

It also helps to encourage people to stay engaged with the natural world. Research shows that, when people feel disconnected from nature, they can lose the need to protect it. When they spend time outdoors, they feel a need to preserve it.

Anger can also be a good motivator. It is healthy and constructive to say “no!” to destructive practices. Feelings of moral responsibility, concern, sadness and depression over our own actions can be helpful as well — provided it leads us to think creatively. For it is in creating, not complying, that we will solve global warming and climate change.

Renewable energy use is growing rapidly. The leaders in Europe pledged to shift away from fossil fuels by 2030.  President Biden, with the support of major automakers, announced a plan that half of all new vehicles sold in the United States will be electric. Even China pledged it will strengthen pledges to cut greenhouse gas emissions and reach carbon neutrality, which has been shaken by flooding that has displaced 13 million people. The disaster was caused by a slow-moving rainstorm—exactly the kind of weather that scientists say will occur even more frequently.

The climate scientists caution to not lose sight of the mission. Better to focus less on hand-wringing, they say, and more on getting to work. If we elect the right leaders, and they do the right things there is still time.