The Delta Variant coming along as it has is making the task of making ends meet difficult, to say the least. While some people who keep society running —  nurses and social workers, firefighters and police officers, school teachers and pediatricians, even carpenters and engineers don’t make enough to support their families.  Americans as a whole saw their earnings increase 13% in the past few years. The United States economy added more than seven million jobs over the last twelve months for the first time in history in January.  Wages are rising, the national GDP is booming, and the end of the pandemic appears just around the corner after the vast majority of Americans opted to take the safe and effective vaccines created by American scientists.

But Americans aren’t feeling it. In fact, they are in an historically bad mood, about the country, about their leaders and about their own lives.

Getting by is harder today because we are having a COVID-caused spike in prices.  Gasoline is up 56 percent. Beef is up 2.3 percent in just one month. And used car prices are up 30 percent. Overall inflation is up 5 percent in a year — the largest increase since 2008 — and the fastest rate of increase since 1982. If your income hasn’t increased at least 5 percent in the last 12 months, you’re losing purchasing power.

The average cost of living in the U.S. far exceeds the average income of most professionals. The average household requires two incomes now. Households with two incomes used to have extra cash to spend on things like vacations or private school tuition.  Around 35 million people (10% of the U.S. population) live in households that are scheduled to lose unemployment income around Labor Day.

Take a look at the average monthly living costs for a family of four. These are extremely conservative estimates gathered from multiple cost of living calculators.

The United States adds 531,000 jobs in October as the Delta virus eased and the unemployment rate dropped 0.2 percentage points to 4.6 percent.

The median household income stands at $5,264 per month before taxes. That leaves just under $4,000 after taxes, and it doesn’t include deductions for 401K pension and basic health insurance — or student loans.

All things considered, the average household is sinking into debt by about a thousand dollars per month.

Two years ago, The New York Times reported on the average incomes and expenses of parents with two children. Time and again, they found that even two incomes barely bring in enough cash, since you wind up paying anywhere from $500 to $2,000 a month for childcare.

The reason is simple. The average job hasn’t kept up with the cost of living. It doesn’t even come close:

Basically, half of one parent’s monthly income covers daycare, and the rest goes to offset the cost of living.  These days, the luckiest families break even. Everyone else is still going into debt, just not as much as they would be with a single income. 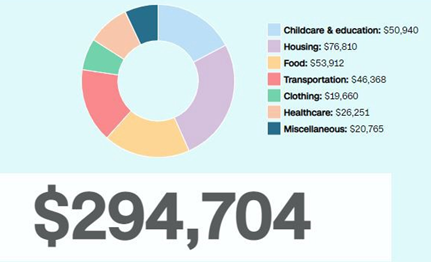 Starting a family has become a luxury. CNN has a new online calculator called “How much will it cost to raise your child?” It’s fun to play with, in a perverse kind of way. Here’s how much it’s going to cost me to raise a daughter:

According to calculators like this, having just one child adds about $17,000 a year to your annual cost of living. After all, you have to feed and clothe them. You may have to move into a bigger house or apartment.

This might explain why the U.S. birthrate is the lowest it’s been in 32 years. More than 40 percent of millennials report putting off children and buying homes because of financial instability. This is going to have consequences for baby boomers. According to Joseph Coughlin of Forbes, it means they’re not going to be able to sell their homes. This is important because older people typically want to downsize after they retire and cash in on their equity.

World food prices have soared by 31% over the past year, according to the Food and Agriculture Organization of the United Nations..  Unlike prior price booms, this one isn’t being driven by typical factors like market demand from emerging nations or a weak US dollar.

The rise in food prices is driven by multiple factors — some of which have nothing to do with extreme weather. More than 95% of the Western part of the United States is currently in some level of drought. Droughts have caused some farmers to stop growing some crops altogether — complete crop failure.

Some food inflation is being caused by a shortage of workers, including in the agricultural sector amid the pandemic. Transportation costs are also high because of rising oil prices and a shortage of truck drivers. That’s not to mention elevated packaging costs.

Severe weather events have contributed to natural catastrophe losses of $40 billion during the first half of 2021 alone, according to Swiss Re, the world’s largest reinsurance company. That’s the second-highest amount on record.

Home prices surged at the fastest annual pace since 1979, Rental prices leaped 2.5% in June, to well above the pre-pandemic trend.

To help through this economic quandary, we need to raise the minimum wage. The minimum wage used to go up hand in hand with the productivity of the U.S. economy. Why should it not now?  Billionaires have increased their wealth by 44% since the pandemic began.

The national minimum wage was created by Congress under the Fair Labor Standards Act (FLSA) in 1938. It was all of the twenty-five (25) cents per hour.

Since 1950, the hourly minimum wage has almost never been lower than it is now. Of course, 1950 is literally a lifetime ago, and the U.S. is now a completely different country. Our per capita gross domestic product is now four times greater. A UNIVAC computer of the time was 38 feet long, weighed eight tons, and had about 1/1,000,000 of the memory of today’s cheapest iPhone. 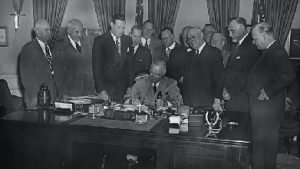 After the late 1960s, Congress stopped raising the minimum wage in step with productivity. Instead, over the past 50 years, Congress has allowed the minimum wage to plummet in real terms. That is, minimum-wage workers of the past were actually paid more than minimum-wage workers make today — even though today’s workers live in an economy able to sustain a livable standard of living for everyone.

The Coronavirus Pandemic Relief Bill passed by the House of Representatives this year would raise the federal minimum wage in steps until it reached $15 an hour in 2025. But an increase in the minimum wage has been removed from the Senate’s legislation. So it remains at $7.25 an hour, a wage that is failing to attract many people to return to such low-paying jobs.

With global airline traffic plunging 66% as COVID-19 grounded airlines to a halt, 2020 was the worst year in aviation history. Even in the U.S., business travel continues to languish. Although business travel accounts for only one in seven or eight trips, it produces 45% of the revenue earned by big airlines.

Somehow, everyone working a federal minimum-wage job in 2021 is paid less per hour than the inflation rate-adjusted $8.25 or so that they would have gotten in 1950. The minimum wage needs to be $24/hour.