While violent and property crimes dropped notably at the onset of the pandemic, the overall violent crime rate returned to early 2020 levels. Crime decreased the following year. The FBI has released crime statistics for the U.S. in 2021. Violent crime volume decreased by 1% in 2021, from 1,326,600 in 2020 to 1,313,200. Rates of robberies decreased 8.9% from 2020 to 2021 New crime data show that four major cities—Los Angeles, Oakland, San Diego, and San Francisco—have seen an increase in homicides and car thefts, even while violent and property crimes overall remain below pre-pandemic levels.

Through September 15 of 2021, there have been 498 mass shootings across the US. Our message to the victims is“you have to die because the right to guns is more important than your life.

The Gun Violence Archive shows that gun deaths and injuries in road rage incidents increased 98 percent between 2017, when 263 people were shot, and 2021, when 522 people were shot.

Car thefts are notably up by 24%, and commercial burglaries have risen by about 26%. Commercial burglaries jumped significantly in May 2020, coinciding with civil unrest after the killing of George Floyd, and have declined in early 2021, almost reaching pre-pandemic levels.

Happening in major cities are the smash-and-grab robberies like those in California and Minnesota, They were organized on social media and were carried out by people who did not know each other.

With the deluge in online shopping came a rise in fraud rates. Cybercrime and other scams are on the rise. Elderly scams occur far more frequently than you might expect — seniors account for more than $3 billion in losses annually, making elder fraud a growing problem. Seniors are often targeted because of their lack of digital literacy, their trusting and polite nature, and their tendency to have financial savings and good credit, the FBI reports. Typical crimes are identity theft, Medicare fraud, financial scams, and other types of cybercrime.

Changes in criminal laws, as well as prosecution and judicial sentencing patterns, also likely play a role in the declining incarceration rate and the number of people behind bars. While America’s incarceration rate falls to the lowest level since 1995, the U.S. still has the highest incarceration rate in the world, according to the World Prison Brief, a database maintained by the Institute for Crime & Justice Policy Research at Birkbeck, University of London. The database compares incarceration rates across more than 200 countries and territories using publicly available data for each jurisdiction.

Gun violence in America can get worse. 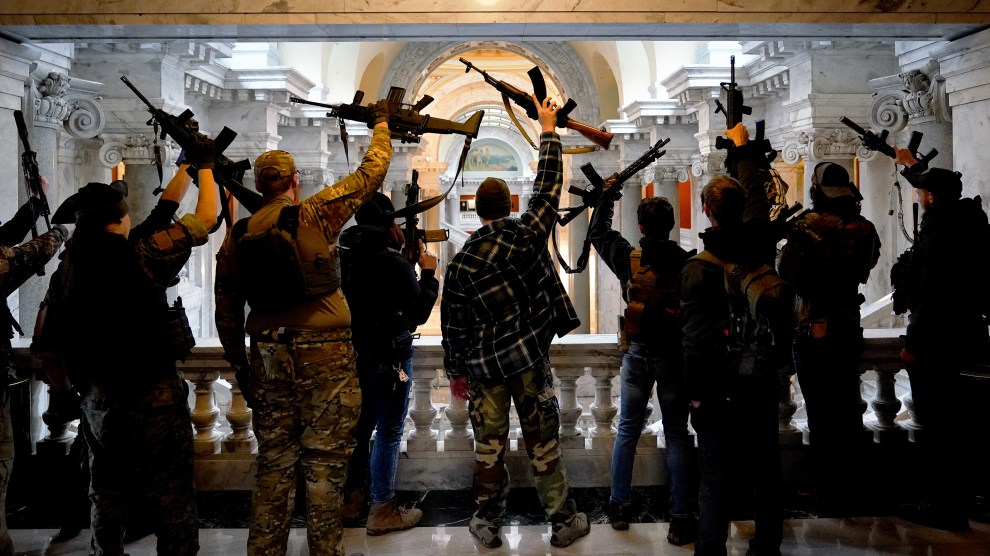 Fight disinformation. Get a daily recap of the facts that matter. Sign up for the free Mother Jones newsletter.

Over the past decade, amid rising mass shootings and fierce debate over America’s gun laws, the failure by Congress to mandate a stronger and more comprehensive background-check system for gun buyers, a policy with long-standing bipartisan support among Americans, including gun owners. Much has changed in recent years, in fact, at the state and local levels, where governments adopted hundreds of regulations either tightening or loosening restrictions on firearms, from a national perspective, however, the picture is bleaker.

Other crimes committed are more sinister and many involve people with previous mental health conditions.

In March 2019, Anthony Comello, a 24-year-old conspiracy theorist from Staten Island allegedly gunned down a Gambino crime boss because he believed he was a prominent member of the deep state. The 24-year-old was found mentally unfit to stand trial in June 2020.

A few months later, Liliana Carrillo, a mother-of-three from Los Angeles, admitted to drowning her children to save them from what she said would be a lifetime of sexual abuse.

The US Supreme Court, now tilted decisively to the right with three Trump-appointed justices, will soon rule on a case widely expected to open the floodgates for many more Americans to carry loaded guns whenever and wherever they want. Broad scientific research has long since confirmed that the presence of more guns throughout society correlates with more gun injuries and deaths. 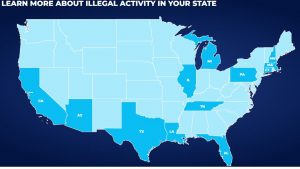 In addition to its high rate of incarceration, the U.S. also has the largest overall number of people behind bars. With more than 2 million jail and prison inmates, the U.S.’s total incarcerated population is significantly greater than that of China (approximately 1.7 million) and Brazil (about 760,000). But data limitations in China and other countries make direct comparisons with the U.S. difficult. The World Prison Brief notes, for instance, that China’s total excludes people held in pre-trial detention or “administrative detention” – a group that may number more than 650,000. China’s total also excludes the estimated 1 million Uyghur Muslims who are reportedly being detained in camps in the Xinjiang autonomous region. If these two groups were added to the total, China would far surpass the U.S. in terms of its total incarcerated population.

At the end of 2019, there were just under 2.1 million people behind bars in the U.S., including 1.43 million under the jurisdiction of federal and state prisons and roughly 735,000 in the custody of locally run jails. That amounts to a nationwide incarceration rate of 810 prisons or jail inmates for every 100,000 adult residents ages 18 and older. Mugshots stay online forever. Some say the police should stop making them public.

Crime has an effect on health. Residents in neighborhoods with high rates of violent crime suffer a variety of mental and physical health problems. Violent crime also tends to be concentrated in areas with higher populations of people of color. New research shows that when violent crime decreases, so too do rates of cardiovascular-related mortality.

One measure you can use for your home is to use security cameras to catch “porch pirates” in the act of stealing your packages from your home. There is another alternative – package delivery boxes.

Cybersecurity problems are causing businesses to respond globally to systemic cybersecurity risks. To combat cybercrime and to protect privacy, new laws are big proposed. Criminals request excessive ransoms to decrypt data after a ransomware attack. One problem is that decryption tools are often are buggy and slow and might not even work. Having a backup of your work along with a disaster recovery plan is a better solution.

Recent data suggests that 73% of enterprises lose 4% of their online revenue to ad fraud each year. >> Read more.

Google purchased Siemplify, a provider of security orchestration, automation, and response (SOAR) technologies.. A recent survey from Trend Micro found that the proliferation of cybersecurity tools — enterprises typically have an average of 29 different security tools have lessened the ability to block threats.

The cryptocurrency explosion has forced Washington to adapt federal financial rules to a quickly growing and changing industry.  Americans have poured billions of dollars into cryptocurrencies and a wide array of blockchain-based financial platforms over the past year as the pandemic triggered an investment boom.

While the crypto market has picked up steam steadily over the past decade, a surge of interest in the space and the rapid rise of decentralized financial networks has drawn fresh attention from regulators and lawmakers.

Lawmakers zeroed in on cybersecurity like never before in 2021, responding to a variety of incidents including ransomware attacks on Colonial Pipeline and major nation state-backed attacks like the SolarWinds hack.

The Better Cybercrime Metrics Act will give law enforcement a clearer picture of online crimes in the United States by requiring the FBI to integrate cybercrime incidents into its current reporting streams to better understand all the types of crime that Americans face. As cybercriminals continue to target vulnerable populations, this data will help lawmakers make an informed case for policy changes to curtail the cybercrime wave, keep Americans safe, and bring these criminals to justice.

The Better Cybercrime Metrics Act will:

The justice system is not equal.  Any decent defense attorney will tell you never to participate in a police lineup. Statistics from the Innocence Project also prove this. More than half (60%) of the 375 exonerees are African American. Most of them (69%) were convicted based on “eyewitness misidentification.” Statistics from the Innocence Project show this.

Only 21% of people working at home are aware of cyber security. The Russian government is linked to a hacking group behind one of the biggest cyber-espionage incidents in U.S. history.  Its hacking efforts are increasing, zeroing in on governments and businesses.

The cryptocurrency explosion has forced Washington to adapt federal financial rules to a quickly growing and changing industry. Americans have poured billions of dollars into cryptocurrencies and a wide array of blockchain-based financial platforms over the past year as the pandemic triggered an investment boom. The surging crypto market has picked up steam steadily over the past decade, bringing with it a rapid rise of decentralized financial networks.  This has drawn new attention from regulators and lawmakers.

The past 12 months have seen more cyberattacks that wreaked havoc on large and small companies and organizations.

The Cybersecurity and Infrastructure Security Agency (CISA) laid out the potential threats to the critical manufacturing sector in an insights report released Wednesday, noting that attacks could increase due to more remote work, which had expanded the threat surface for hackers to exploit.

The critical manufacturing sector is at risk from increased cyber-attack surface areas and limited cybersecurity workforces related to the COVID-19 pandemic,” the report reads. These trends increase the vulnerability of the Critical Manufacturing Sector to the growing number of ransomware attacks aimed at private businesses by increasing attack surfaces and reducing protective abilities.

Key areas of concerns highlighted by CISA include the increased use of robotics and remote processes during the pandemic to protect workers, which CISA noted has opened up new security vulnerabilities, and the increasing lack of qualified personnel to protect highly technical manufacturing systems. Ransomware attacks, which have become a major concern during the course of the pandemic in all sectors, have also become a threat to manufacturing companies.

No one is safe on the internet these days. But US accounts were particularly affected by data breaches this year.

But in the wake of the chaos, a silver lining has emerged around a never before seen level of bipartisan support and genuine interest on Capitol Hill for strengthening the nation’s cybersecurity.

More than half (58%) of IT, DevOps, and security professionals are “concerned” or “very concerned” about former employees leaving with secrets or knowledge about how their organization accesses infrastructure. More than a quarter (27%) are very concerned, demonstrating the urgent need for a reliable solution.

There is an 84-page complaint against the terrorists who tried to overthrow the government on January 5  w lists dozens of individuals, and alleges violations of local D.C. and federal laws, including the 1871 Ku Klux Klan Act, which targets violent conspiracies.

Representative Elizabeth Cheney pointed to a specific criminal statute — a felony, 18 U.S. Code § 1512 — that she suggests President Donald Trump might have violated. This was a Republican member of the committee floating a specific potential Trump crime that the committee apparently wants to focus on; it also came shortly after a federal judge upheld the use of the statute in a key Jan. 6 case.

The White House released a memo outlining an urgency for greater security amidst ongoing cyber attacks. The memo outlined a vision for government agencies to adopt a “zero trust” architecture. Just like we all have to take our shoes off and ditch liquids at airport security lines post 9/11, these new measures will include multi-factor authentications and access controls.

Abnormal Security seeks to make email safer by embedding in-email communications to catch suspicious activity. If you’ve ever had a boss ask you to buy a gift card or HR ask for personal details via email, this in-email action will snuff out that duplicity in an instant.

BluBracket fixes security vulnerabilities in code without disrupting the flow to an engineering team. Don’t ask me how they do it, but the company’s investors at Evolution Equity Partners and SignalFire might know.

Lastly, Securiti.Ai is The Forrester Wave top-scorer in data intelligence, data mapping automation, privacy rights automation, and more. It was also named “Most Innovative Startup” at the RSA conference in 2020. The start-up’s team nearly doubled between 2020 and 2021, while the company continues to hire for technical roles.