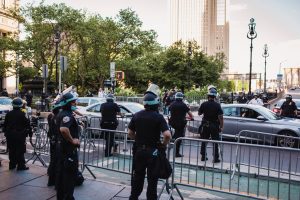 America resisted the efforts of the German American Bund in the 1930s to mobilize and win World War II. But now in 2020, we are on our way to an authoritarian state.

Trump began misusing federal forces to separate children from their families seeking asylum in the USA. Asylum seekers and families are protected by and international federal law which forbids the government to simply send them back. Federal courts stopped this administration from holding families for months without justifying the decision to keep them in detention.

A federal judge said he believed that if the allegations against the administration were true, they might very well be unconstitutional. Some courts have found this is implicitly part of the Fifth Amendment’s guarantee of “liberty” without due process of law. UNITED STATES DISTRICT COURT SOUTHERN DISTRICT OF CALIFORNIA Ms. L.; et al., Petitioners-Plaintiffs, v. U.S Immigration and Customs Enforcement (“ICE”); et al., Respondents-Defendants. Case No.: 18cv0428 DMS (MDD) violates their due process rights,

Millions of people were outraged but no articles of impeachment arose from this abuse of power.

In July, federal forces from the Department of Homeland Security were deployed in Portland, Oregon Kansas City and Seattle using unmarked cars and officers in camouflage wearing no badges, and with the power to abduct people from the streets.  President Trump has threatened future deployments to other cities “run by liberal Democrats,” including Chicago, Oakland, and New York.  The Mayor of Portland was gassed.

In June 2020, the Trump administration began deploying federal law enforcement forces to some cities in the United States, in response to rioting and monument removals amid the George Floyd protests. Federal law enforcement elements have been deployed under Operation Legend, Operation Diligent Valor, and the Protecting American Communities Task Force (PACT). The Department of Homeland Security (DHS) has cited an executive order regarding “monuments, memorials, and statues” as allowing federal officers to be deployed without the permission of individual U.S. states. The latest deployment he’s announced is to Kenosha, Wisconsin.

We know he’s worried about the coming election and the closer it gets, the more erratic and despotic his behavior! Trump says he’ll send law enforcement officials to monitor voting in November.

Federal law prohibits any conduct that intimidates voters. Several states expressly forbid law enforcement presence at the polls. Department of Defense and National Guard personnel must also refrain from conducting “operations” at polling places. Furthermore, the President does not have the authority to send local sheriffs anywhere, and sending armed federal law enforcement to the polls could result in violations of US criminal code.

We’re experiencing a creeping martial law one step at a time. Martial law isn’t declared like in the movies – one which is all too easy to normalize and accept because it proceeds in slow steps.

Do Americans understand that Trump is undoing our constitutional right to a free election?  A right millions of Americans have died protecting. Concerns are voiced by politicians and civil liberties groups that these deployments are unconstitutional and a red flag of authoritarian measures or the beginning of martial law. Trump is instituting martial law now in the time-honored way that authoritarian-fascists do.  We need to remember “The cost of liberty is less than the price of repression.”