Society began to shift from being primarily about farming to about working with technology in the late 1700s to the early 1800s. Fewer people worked in the fields and people began working in factories. Large-scale production of the automobile started in the early 1900s. Henry Ford made cars affordable for the working class. 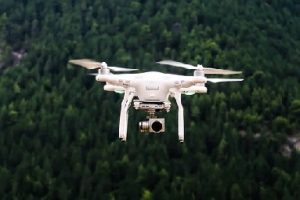 When new technologies are first introduced, they often start out being dismissed as a “toys or gadgets.” The first telephones could only carry voices a mile or two in 1876. The leading telco of the time, Western Union, passed on acquiring the phone, speculating they would not be useful, only gadgets.

Generally, new technology is adopted in phases over the span of years, led by early adopters who try new apps and services as depicted by Everett Rogers’ bell curve. This process has been speeded up by lockdowns and other restrictions that have changed the ways of doing things. Businesses are adapting to the new reality on a daily basis, and consumers are far more willing to try new things like online grocery shopping, online car buying, even selling your home because the pandemic made the usual way of doing things difficult or dangerous. 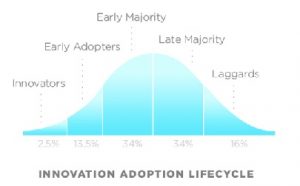 Telehealth has taken hold: In 2016, about 14% of physicians surveyed by the American Medical Association said they used telemedicine tools for virtual visits. By 2019, the use of these tools was twice as prevalent, with 28% of physicians saying the same. Telehealth visits have exploded as they’ve gone from being seen as an experiment to an immediate necessity.

Automation is currently displacing millions of workers. How many jobs have been made obsolete? Tollbooth operators, customer service representatives, bookkeeping, data entry, receptionists, proofreaders, retail clerks to name some.

Drones or unmanned aerial vehicles have won wars and are now indispensable, putting eyes into the sky.  Some people have robot pets. Vacuum cleaners are given intelligence to make our lives easier.

AI systems are increasingly being used to monitor our use of Facebook and other social media, the Internet, our phones, and cameras are capable of facial recognition. Synthetic voices can be generated by AI, closely mirroring the intonations of the actors. Already facial recognition, and systems like China’s social credit system where AI helps track individuals and evaluates their overall trustworthiness.

In the early 1940s, science fiction writer Isaac Asimov spelled out his three laws of robotics: that robots were not to harm humans, directly or indirectly; that they must obey our commands (unless doing so violates the first law); and that they must safeguard their own existence (unless self-preservation contravenes the first two laws). 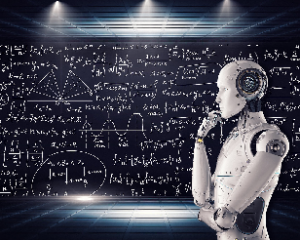 Artificial intelligence is aggravating callers with automated phone trees as well as even replacing managers. AI systems monitor workers’  efficiency and use automated emails to fire them when it decides they’re not doing their jobs well enough. Fully automated manufacturing can operate in “dark factories” doesn’t require lighting, heating, or a workforce that commutes to the site by car.

Airports are using mobile robots to spray disinfecting chemicals on their facilities — work that janitors used to do wearing personal protection equipment.

The Pennsylvania Turnpike eliminated toll collection by hand and switched to a cashless electronic system.

88% of businesses worldwide plan to adopt robotic automation. There were 12 million robotic units worldwide in 2020.  The robotics industry already employs about 150,000 people worldwide in engineering and assembly jobs.

In 2021, China has 310 000 industrial robotic installations, the highest in the world. Japan comes in second with 61 000. South Korea and the United States tie in third place with 46,000 installations. The biggest percentage growth in robot purchases is coming from the food and consumer goods sector which reflects the boom in online shopping since the pandemic began.

Artificial intelligence-powered robots are taking a major role in warfare. Azerbaijan defeated Albania in the 2020 conflict with its drone fleet, retaking possession of Nagorno-Karabakh. $165 will be spent on military robots by 2025. 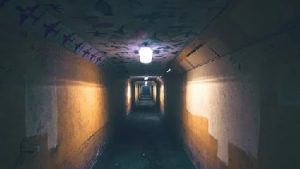 There is a dark side to these forecasts. AI systems “deepen privacy intrusions” through the increased use and misuse of personal data. Some managers are automating because fewer and fewer people want to work on the assembly line for $15 an hour, which is what he pays to start.

Will self-replicating nanorobots get to the point that they will be interested only in self-preservation and replication, not protecting humanity or following its orders. Such sentient machines would clearly tear up Asimov’s rulebook. Elon Musk, the billionaire industrialist has called AI humanity’s “biggest existential threat” and advocates a ban on future killer robots.