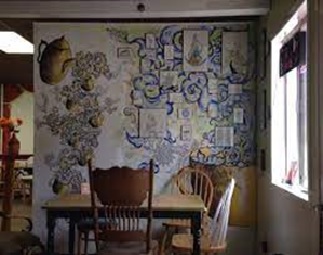 They are closer than you think. In a community a few miles from where I live, ruffians robbed and desecrated a health food store, painting swastikas and profanity on the walls. The Coffee Cantina has been a community gathering place that has recently changed hands.

Meanwhile, two men have been charged in an alleged plot to firebomb the California Democratic Party’s headquarters in Sacramento, according to an indictment unsealed Thursday. These men, Ian Benjamin Rogers and Jarrod Copeland were “prompted by the outcome of the 2020 Presidential election” and believed their attack would spark a “movement.

In July, the components for 50 homemade bombs were found in Virginia in the home of a man who stormed the Capitol on January 6th. In Long Beach, California, police are investigating graffiti on a statue Martin Luther King Jr. statue as a hate crime. (CNN).

A Danish man armed with a bow and arrow killed five people in a Norwegian town in what’s classified as a “terrorist act.”

The pandemic worked as a boon for right-wing extremists. Researchers are finding that as the pandemic put more people online for greater periods of time, the recruitment pool for extremists grew. Capitalizing on the “environment of heightened anxiety,” communities formed on Facebook, YouTube, Twitter, 4chan, Gab, Iron March, and Fascist social media channels.

These acts are part of an alarming rise in domestic extremist violence in the United States. According to a Washington Post analysis of data compiled by the Center for Strategic and International Studies, the number of domestic terrorism incidents hit an all-time high in 2020, with right-wing extremist attacks and plots greatly eclipsing those from the far left and causing more deaths.

Just before 11 a.m. on January 6, Rudy Giuliani, Trump’s personal lawyer told the crowd “Let’s have trial by combat.” The ensuing assault left five people dead, and nearly 140 officers were attacked with ax handles, bats, metal batons, wooden poles, hockey sticks, and other weapons. You can see this vicious attempt to overthrow the government on YouTube: https://www.youtube.com/results?search_query=january+6+insurrection. 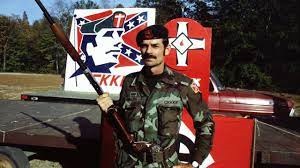 We now know that our worst fears were also held by people at the helm of our military. Gen. Mark A. Milley, the chairman of the Joint Chiefs of Staff saw parallels between Trump’s rhetoric about election fraud and Adolf Hitler’s insistence to his followers at the Nuremberg rallies that he was both a victim and their savior. “This is a Reichstag moment,” Milley told aides. “The gospel of the Führer.” This is chronicled in a new book on Trump’s last year in office by Philip Rucker and Carol Leonnig entitled

That day in his speech on the Ellipse, Trump said, “Our country has had enough. We will not take it anymore, and that’s what this is all about. To use a favorite term that all of you people really came up with, we will ‘stop the steal.’ Today I will lay out just some of the evidence proving that we won this election, and we won it by a landslide. We’re going to try and give our Republicans — the weak ones because the strong ones don’t need any of our help — we’re going to try and give them the kind of pride and boldness that they need to take back our country.”   These are the words of a would-be tyrant.

The officer who shot January 6 insurrectionist Ashli Babbitt as she tried to break through a broken window in the Capitol building did nothing wrong. An internal Capitol Police review not only found that the officer didn’t violate internal policy but that his actions almost certainly saved the lives of lawmakers and staffers. By shooting Babbitt, the officer might have l kept the insurrection from spiraling completely out of control.

Threats and disinformation spread across the country in the wake of the Capitol siege, shaking the underpinnings of American democracy.

Upstanding Republicans are decrying this behavior. We have to hope the police, the national guard, the sheriffs across the country care more for the Constitution and basic human decency to provide us protection against this fifth column, numbering more than the original Revolutionary Army. What we are experiencing is eerily like the scenes in paranoid thrillers and conspiratorial dramas like The Manchurian Candidate, Seven Days In May, The Parallax View, The Conversation, Three Days of the Condor, Marathon Man, Blow Out, Absolute Power, Wag the Dog, The X-Files, and Enemy of the State, among others. 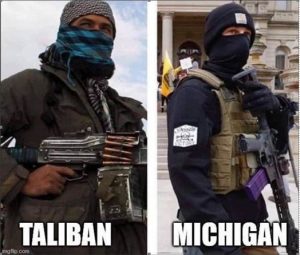 The  Capitol Hill bomb threat in August suggests January 6 siege was a beta test of more to come.  Reports of other acts both in the U.S. and in Europe are coming to light.

Major social media platforms are failing to block 84 percent of antisemitic content that was reported to them through their own measurement tools.  Facebook and Twitter, in particular, showed the “poorest rate of enforcement action.”Rumble has emerged over the last year as one of the most prominent video sites for right-wing viewers. It has positioned itself as the right-wing alternative to YouTube.  It refuses to remove false medical misinformation such as casting doubt on vaccines during a pandemic that has killed more than 4 million people around the world.

Social media platforms need to do much more than they already have to curtail the festering of right-wing hate and violence.

We tell ourselves it could not happen here. Polls tell us 30 percent of Republicans actually believe that the government put microchips inside the coronavirus vaccines to track and otherwise control the American people.  But as the testimony from officers who protected the Capitol on January 6 has come in, we know it can. Officer Daniel Hodges, a white member of the Metropolitan Police Dept. “It was absolutely my pleasure to crush a white nationalist insurrection.” Another testified, “It was an attempted coup that was happening at the Capitol that day, and if it had been in another country, the U.S. would have had sent help.”

Domestic extremists are adapting their online strategies to push disinformation and conspiracies despite a crackdown by social media platforms in the year since the attack by a pro-Trump mob on the Capitol.

Online extremist groups, such as Parler, Gab, and Telegram. The Department of Homeland Security also warned far-right influencers are using more coded language to slip through gaps in mainstream content moderation enforcement.  Activity on alternative platforms has risen in popularity since the January 6, 2021 riot.

The road to fascism is lined with people telling you to stop overreacting. The latest subpoenas show the Jan. 6 probe is ‘rapidly becoming a criminal investigation’: MSNBC analyst

I guess the Republican National Committee considers the January 6 insurrection that included smearing feces on walls as “ legitimate political discourse.”  Can you remember any time when a tragedy has been so minimalized?

Since the Capitol insurrection, the Department of Justice has arrested more than 725 defendants in relation to the storming of the building. Federal prosecutors have charged 225 with assaulting, resisting, or impeding police officers, including over 75 charged with using a deadly or dangerous weapon or causing serious bodily harm to an officer. This includes Rep. Paul Gosar of Arizona, who coordinated for weeks with key organizers of the protest.

In the last few years, we’ve been told that using Hitler analogies was taking it too far but then bad actors on the right slipped in behind us and started equating vaccine mandates with Nazi tactics and themselves with Jews in concentration camps. Dr. Fauci has been compared to Josef Mengele, the Nazi doctor who conducted unimaginably cruel experiments on Jews with a special focus on twins. I think that’s part of the problem—much of what the Nazis did was unimaginable, just as much of what whites did to the Blacks they enslaved was unimaginable, that most of us just can’t quite wrap our heads around the seriousness of what we’re facing. Ignorance makes this possible and this malign forces on the right know this.

I used to wonder if the people who wielded swastikas and Confederate flags understood what the symbols they embraced really stood for. Now I have no doubt. They know the Confederate flag stands not for the nobility of Southern heritage (which never existed), but for support of those who believed in their right to enslave, torture, and, in some cases, murder the Black people they enslaved.  The insurrectionists who wore “6MWE”(Six Million Wasn’t Enough”) t-shirts on January 6th, 2021 know they’re championing the annihilation of Jews.

The subpoenas being issued by the House select committee investigating the Capitol insurrection suggests that the probe is “rapidly becoming a criminal investigation,” according to former acting U.S. solicitor general Neal Katyal.

However, Katyal told MSNBC that the committee’s decision to subpoena Waldron is about more than the PowerPoint presentation, which has been likened to “a blueprint for a coup.”

“I think the documents are really important, but I think it’s a lot more than the documents,” Katyal said. “Actually, what this suggests to me is they are now circling around key individuals in power, both in Congress, the White House, and most specifically, Mark Meadows.”

Katyal noted that the letter from the committee to Waldron states that, according to public reporting, he claims to have visited the White House on multiple occasions, spoken to Meadows eight to ten times, and briefed members of Congress on election fraud theories.

“What Congress is doing here is they are really trying to get information not about Waldron per se, but about Waldron’s contacts with Trump, with Meadows, and with members of Congress, and any of those individuals could violate that criminal statute … obstruction of an official proceeding,” Katyal said, adding that the letter also references language from the statute.

The attempted insurrection wasn’t simply financed by Republican donors (like Clarence Thomas’ wife), it was meticulously planned. There are memos laying out legal justifications for overturning the results of a free and fair election.

There were pressure campaigns against Mike Pence, and now the existence of a PowerPoint presentation has come to light. In addition, we’ve just found out that former chief of staff Mark Meadows—using his personal email and phone—wrote to an unnamed individual that, according to the Committee’s report, on January 6th, “the National Guard would be present to ‘protect pro-Trump people’ and that many more would be available on standby.” Separately and together these are above-the-fold, 80-point font stories. But, yes, let’s do keep talking about inflation and how it’s going to destroy Joe Biden’s presidency.

Former President Donald Trump has announced suggested he will pardon the rioters charged in connection with the Jan. 6 insurrection at the Capitol if he is elected president in 2024.

Trump, who has teased but not confirmed another run for president, has repeatedly criticized the prosecution of individuals who violently stormed the Capitol to protest the certification of Joe Biden’s election as president. But his comments at a Texas rally on Saturday marked the first time he dangled pardons, an escalation of his broader effort to downplay the deadly events of Jan. 6.

Some of those involved in the riot held out hope for a Trump pardon before he left office 14 days later, but none were granted.

The Ottawa roadblocks at the Canadian border make clear that extreme elements supporting fascism and white nationalism are  visible in the appearance of neo-Nazi and Confederate flags and an abundance of QAnon logos emblazoned on trucks, signs, and stickers.  Over $8 million as of February 7, may have come from right-wing sources in the United States.  Funding from interests in the United States has so alarmed members of the New Democratic Party that they have called it “an attack on Canada’s democracy” and have asked the U.S. ambassador “to testify before the House of Commons foreign affairs committee.   A similar attempt at a trucker demonstration in Washington, D.C. fizzed with only about six vehicles driving the D.C. freeways.

The House select panel on the Jan. 6 attacks meets to consider criminal contempt charges against Peter Navarro and Dan Scavino, who worked for former President Trump. It is hoped the committee will Ginni Thomas, activist wife of Justice Clarence Thomas, to testify as part of the investigation.